This week, I finally finished the crocheted Darth Vader I was making for my sister. If you follow me on Instagram, you’ll have seen the pictures I’ve shared of the almost-complete Darth Vader, but it took me a while to add the finishing details. I just kept putting it off and working on other projects, because I wasn’t sure what to do about the face. My sister is a HUGE Star Wars fan, so it had to be as close to the character as possible. So, I found a free pattern online that I used for the main body of the Darth Vader, and then I made some customizations to it. Keep reading for where to find the original pattern, what changes I made, and notes on all the details! 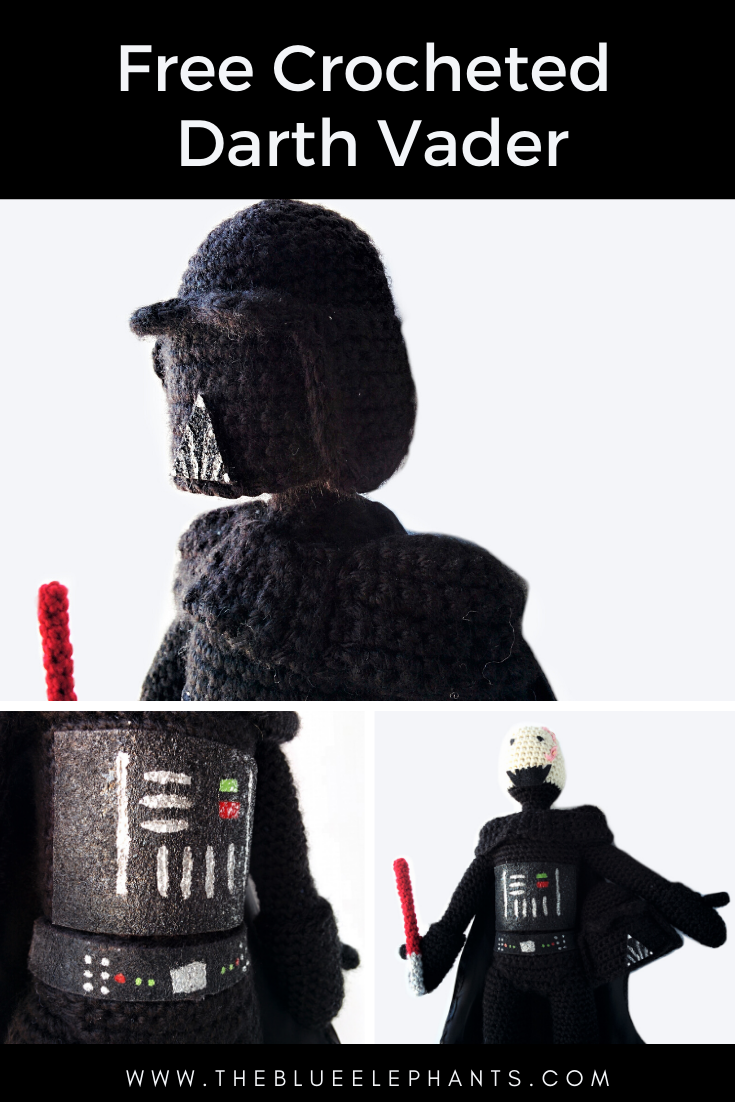 The pattern that I used only had the black yarn and little bits of embroidered felt for the details. The original also used cotton crochet thread and a 2.25mm hook, so the outcome was smaller. I used worsted weight yarn and a 4.50mm hook so that my Darth Vader was bigger and a little easier to work with. I’m not very good with little hooks and wasn’t interested in making something so detailed on such a small scale. 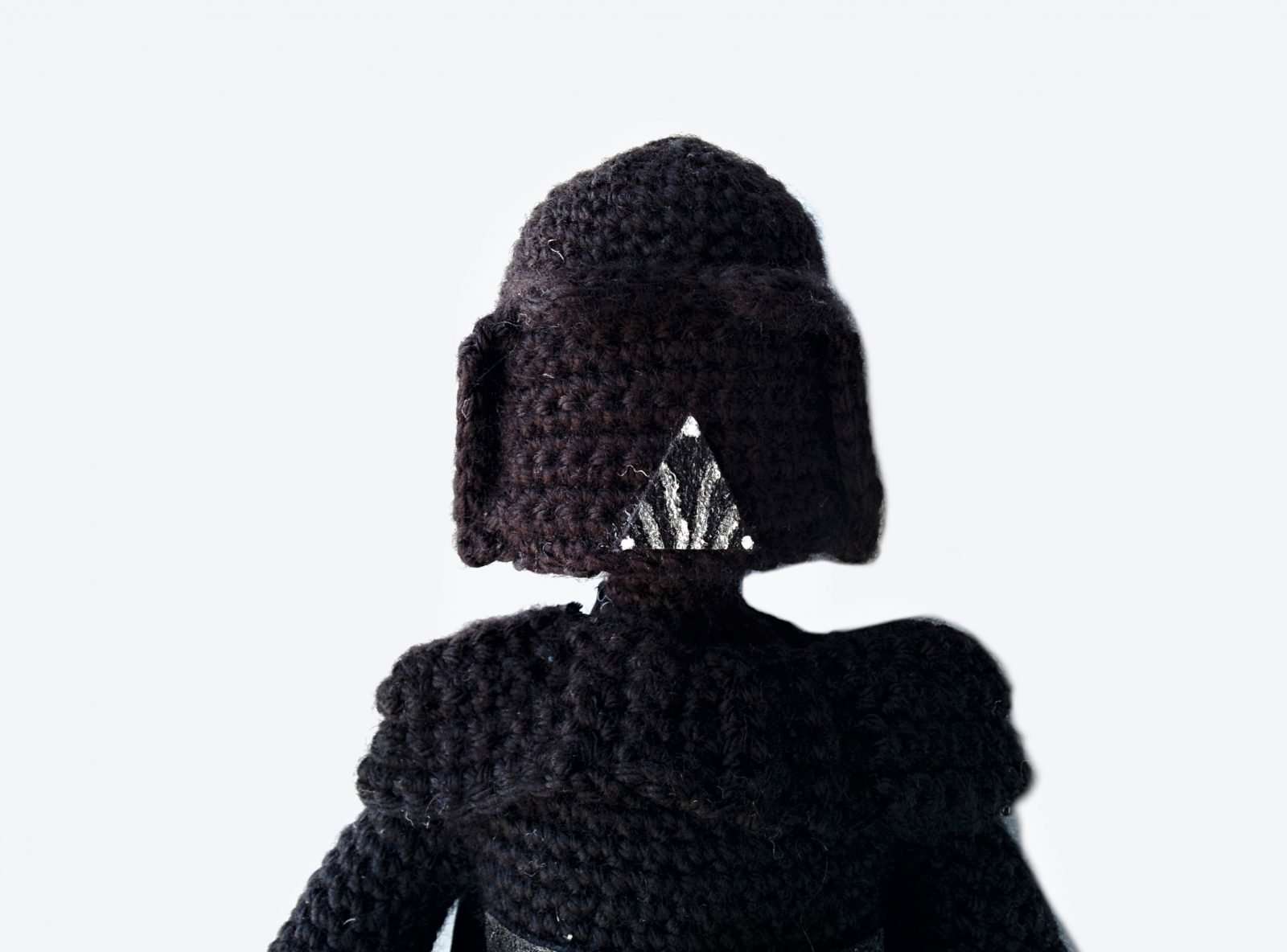 I found this original pattern HERE, available in both Italian and English near the bottom of the page. It’s pretty easy to read and it’s just the pattern and a couple of charts. There are no pictures and walkthroughs so if you’re not comfortable following a written pattern, it may be a little trickier. I do have a post here all about how to read crochet patterns that may be helpful, so if you want to give it a try, please don’t let that stop you! 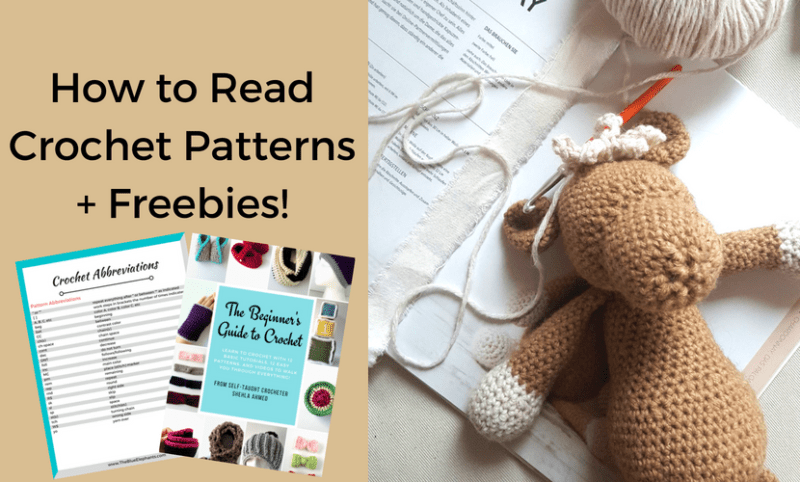 I really liked how this pattern was constructed. First, you make the arms and both legs. Then you attached the legs with a round of single crochet that turns into the body and then arms are worked in as you go. You work your way up and make the head before binding off. Then you make all the accessories: boots, gloves, helmet, cape, etc. Be sure to check the image at the top of the pattern for the armor update! I almost missed it. 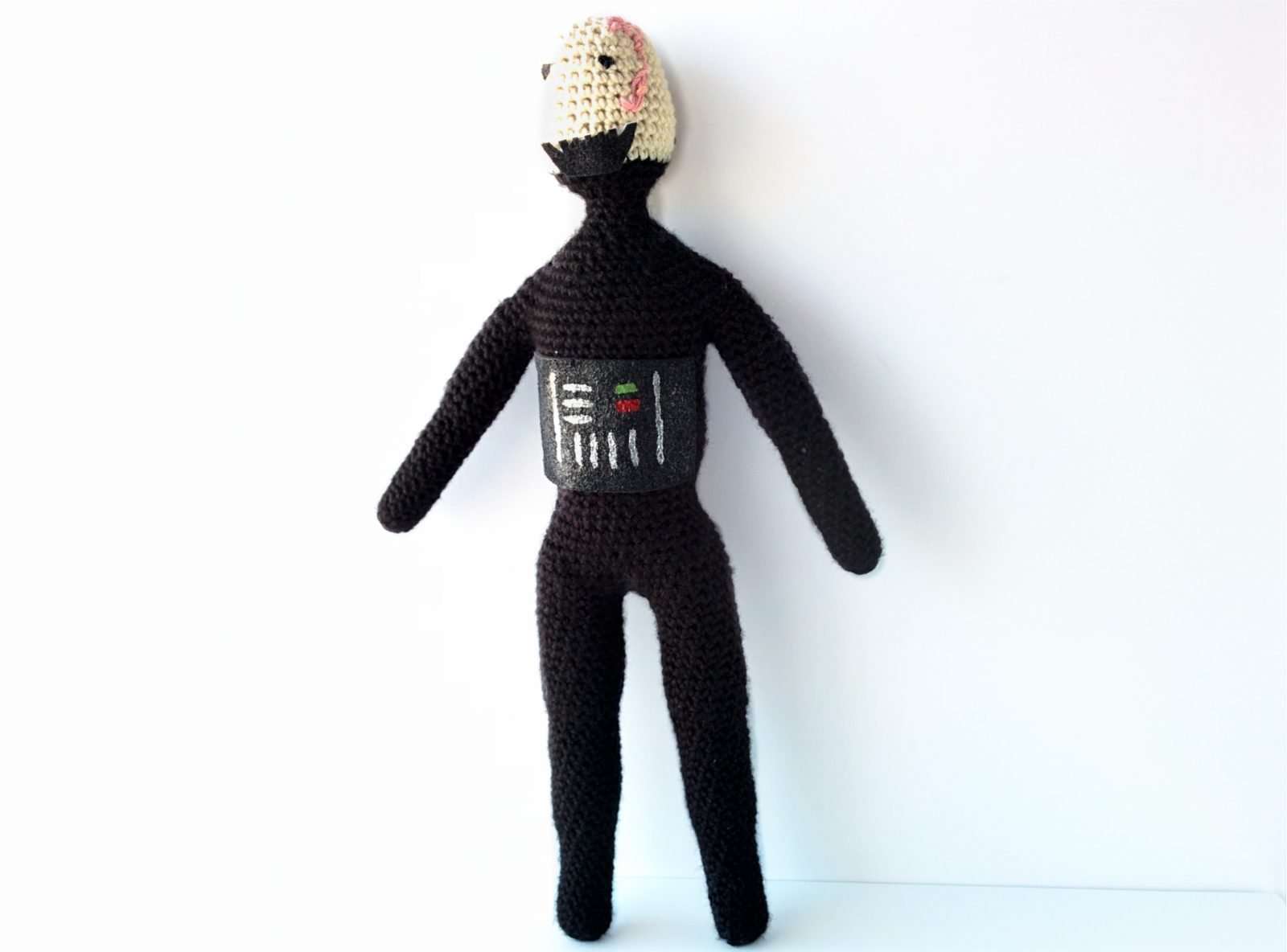 I did make changes, so if you want it to be more like mine, first follow the original pattern for the arms, legs, and body until the neck. Bind off, then make the boots and gloves. Once you’re done with that, come back here to see my changes.

Aside from making my crocheted Darth Vader bigger than the original with the worsted weight yarn and larger hook, I also changed the look a little bit. The original head was just black and meant to be hidden under the helmet, but I wanted mine to be more true to the character. So, after working the first 4 rounds of the head in black (as the bottom part of his breathing apparatus), I switched to the skin color and finished the head. The ivory I used had the perfect gray undertone that Darth Vader has in the movie.

For the more realistic head, I also had to embroider on the eyes and the scar that starts at the top of his head and goes down his cheek. The scar was just a series of random twisting lines using the pink and beige embroidery floss. I didn’t follow a specific pattern, but I just tried to follow the shape from a reference picture of Darth Vader. I also painted some felt black and cut out the shape for the mouthpiece. 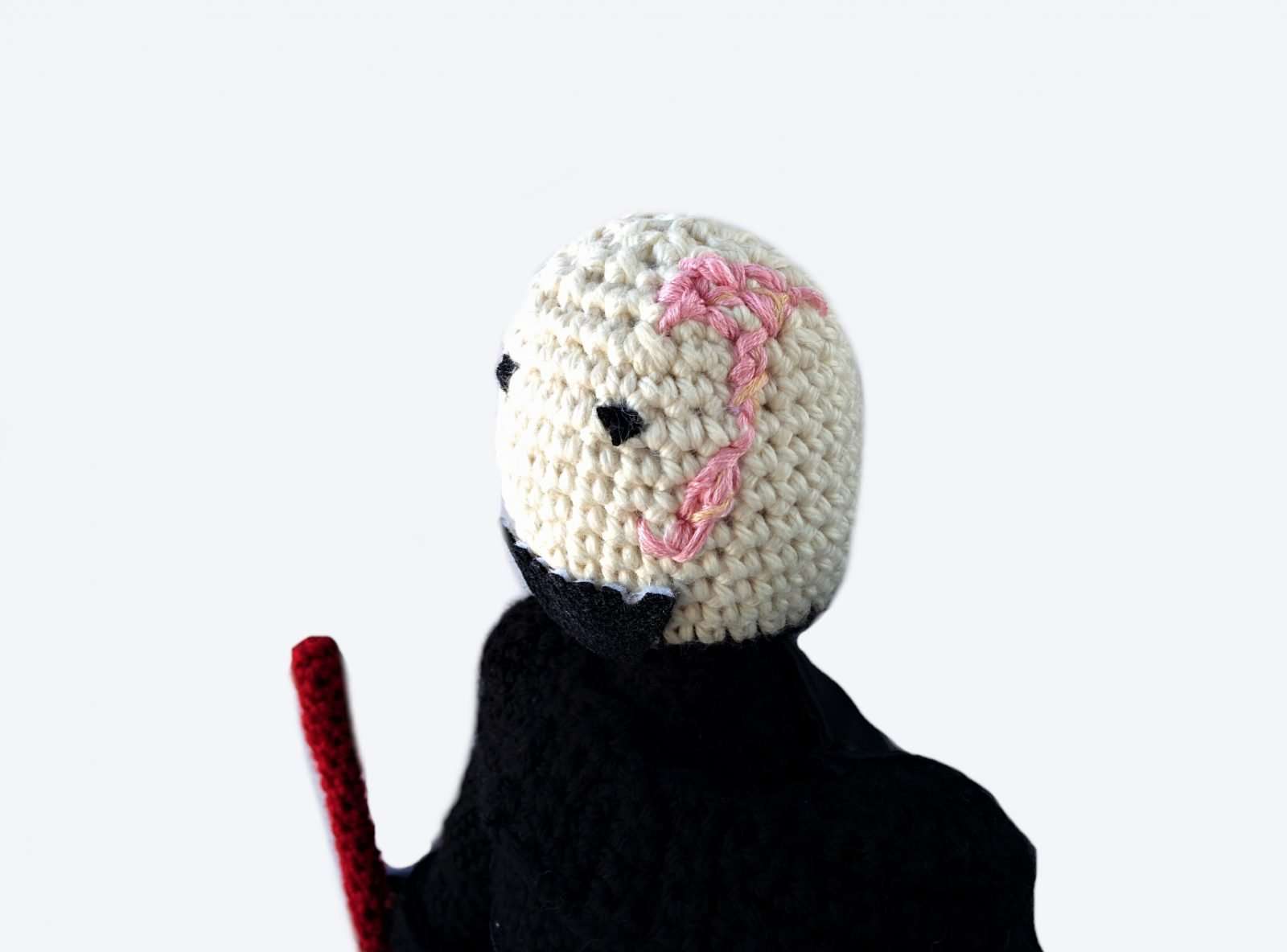 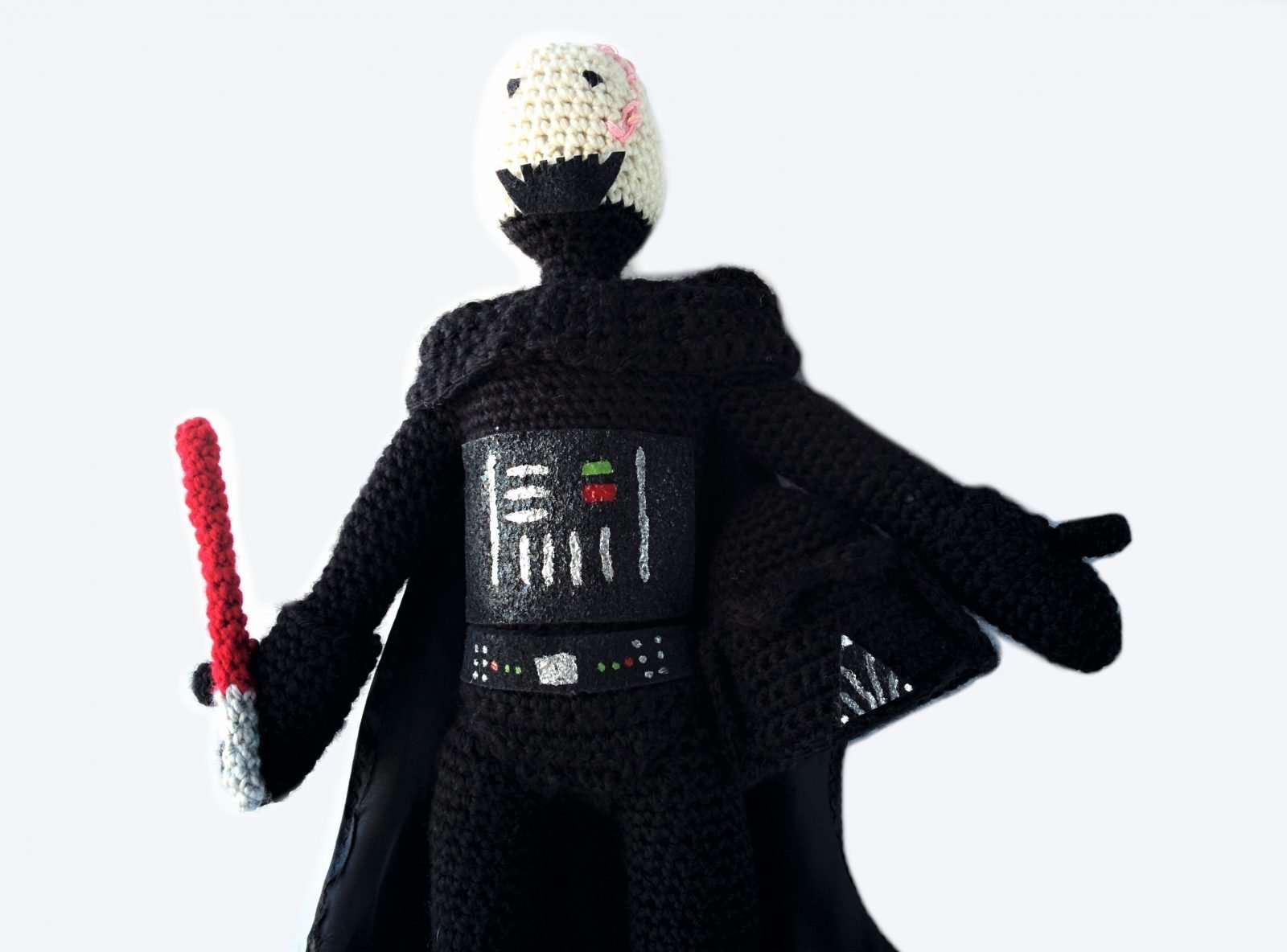 For the helmet, I followed the pattern and that gave the helmet the right shape. But, because the head wasn’t just black underneath, you could see the face under it now. So, I crocheted a small rectangle of black, just in single crochet, and sewed it to the inside of the helmet. That way, the face was covered, but you still get the ridges and sides of the helmet. If you want, you can also use flat black buttons for the eyes on the helmet. I didn’t have any, so I left them out. 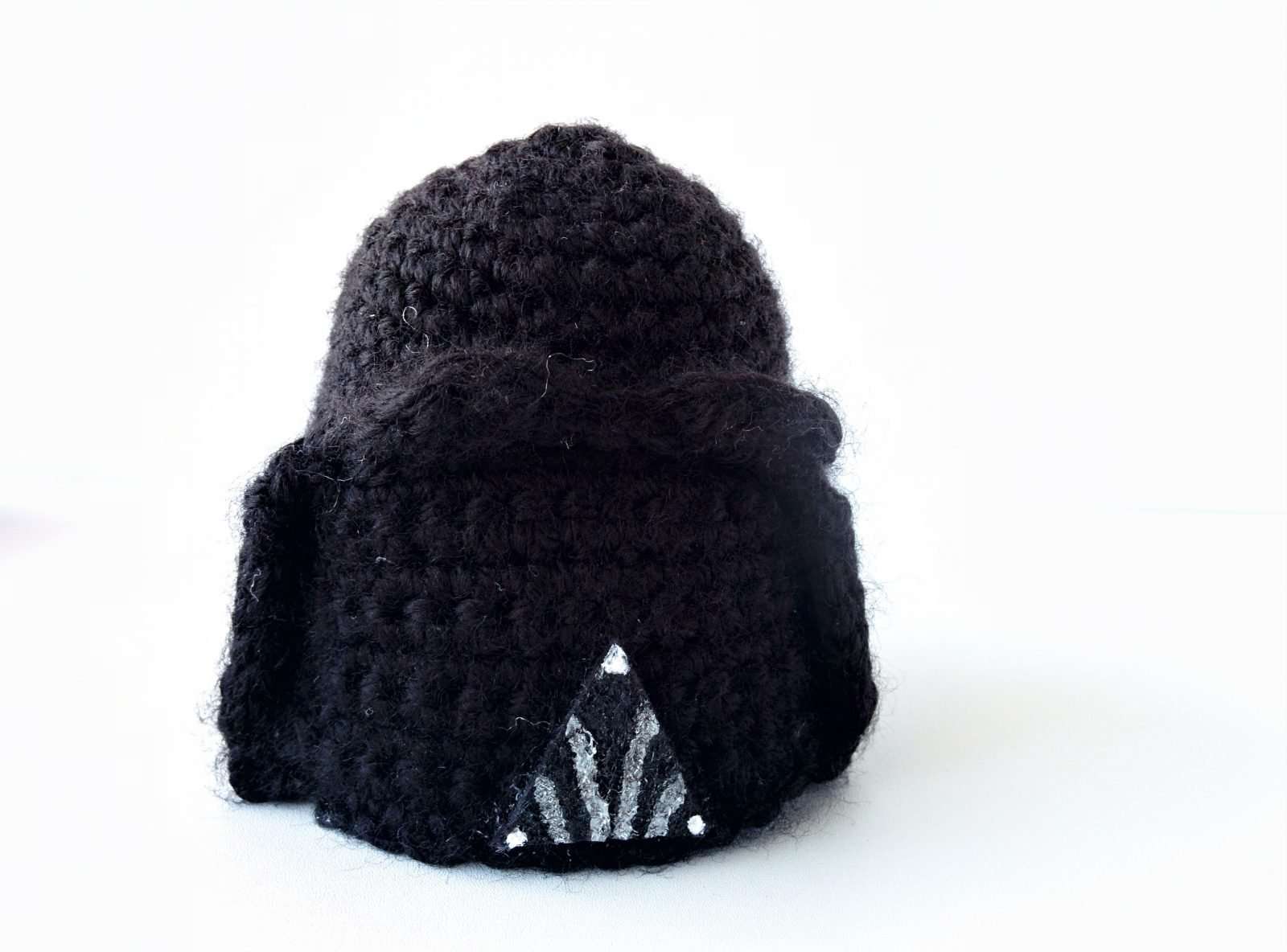 For the shoulders/armor piece, the pattern says to alternate between gray and black yarn, but I just used black.

That’s all I really changed about the pattern. Now, this is where I just left the poor guy waiting while I figured out how I wanted to do the details. I wanted the chest plate and the belt of my crocheted Darth Vader to have all the buttons and look more metallic and high tech, so I didn’t want to just embroider them on. 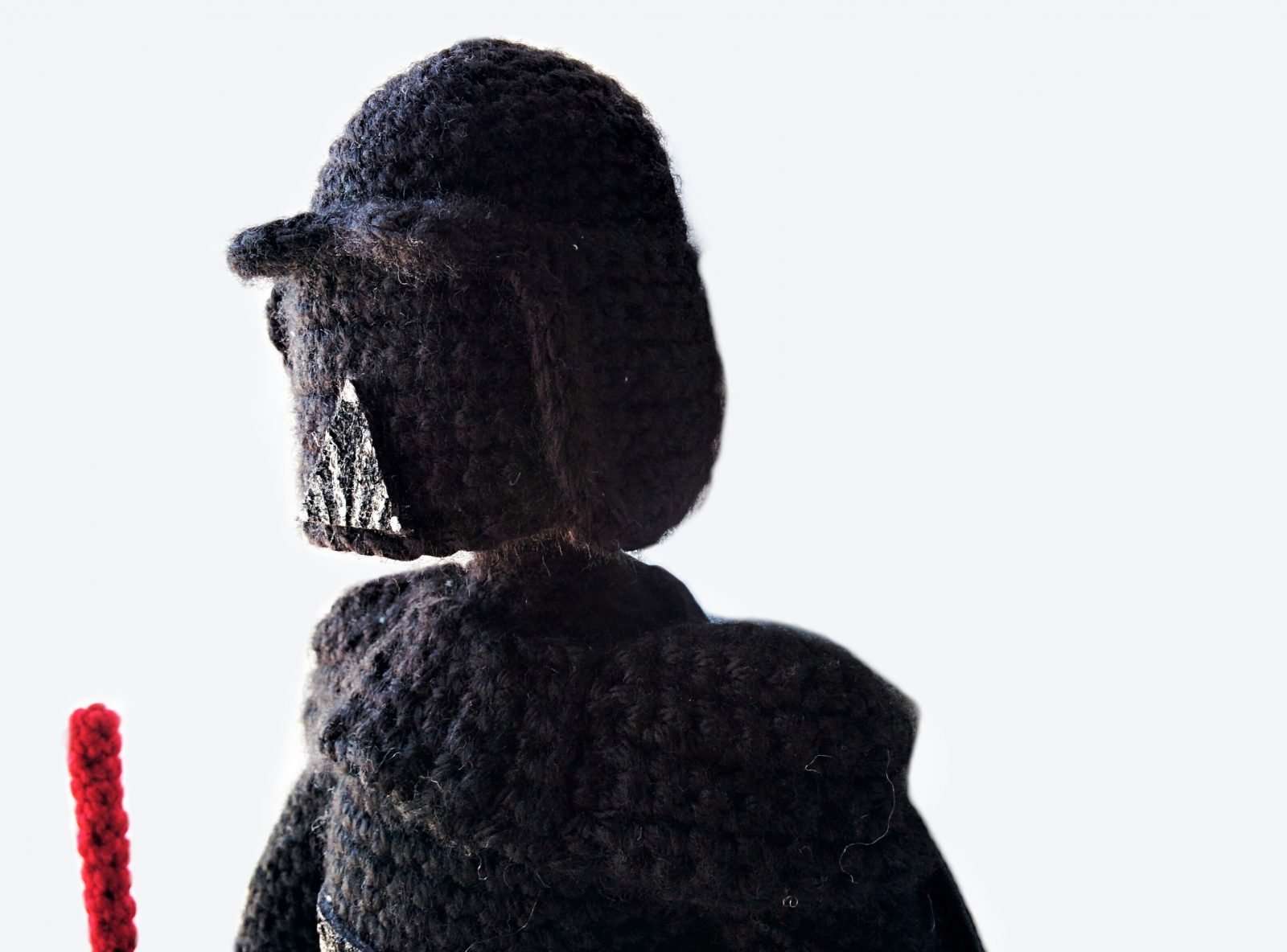 How I Made the Details

The pattern did not include instructions for the lightsaber, although it’s shown in the picture. Here is how I made mine:

2. SC into each space, working in continuous rounds, for 15 rounds. 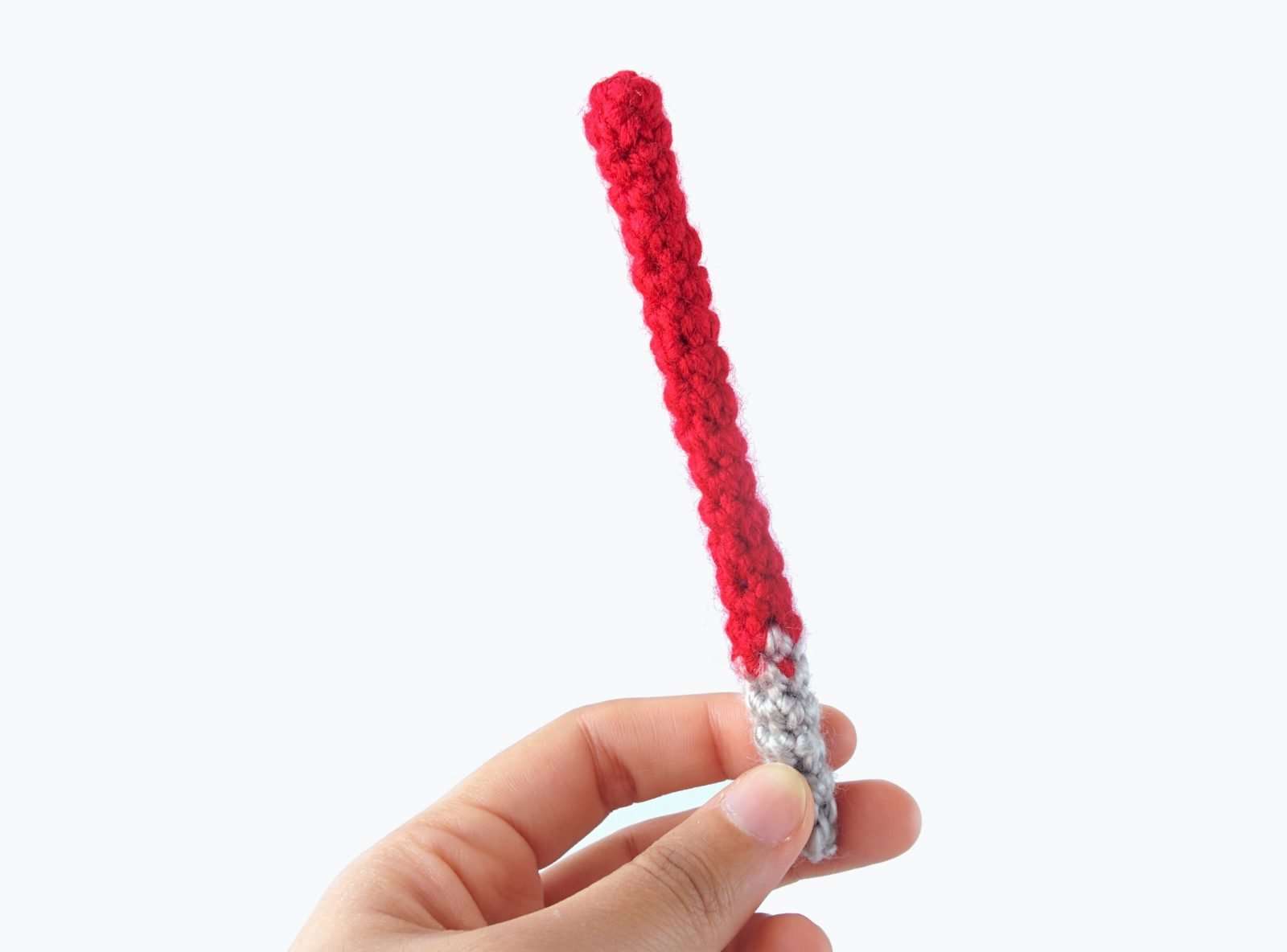 For the belt, and everything else, I painted a large section of felt with black acrylic paint. I had sheets of white felt, and although you can just buy black felt, I liked how the paint gave it a semi-shiny look. I painted half a sheet of felt and used that for everything.

For the belt, I cut a strip that would go all around the waist of my crocheted Darth Vader, along the top of his pants. Then in the center of it, I used silver paint to create the buckle. With a small pointed brush and red, green and silver paints, I also painted on the lights and buttons on either side of the buckle. 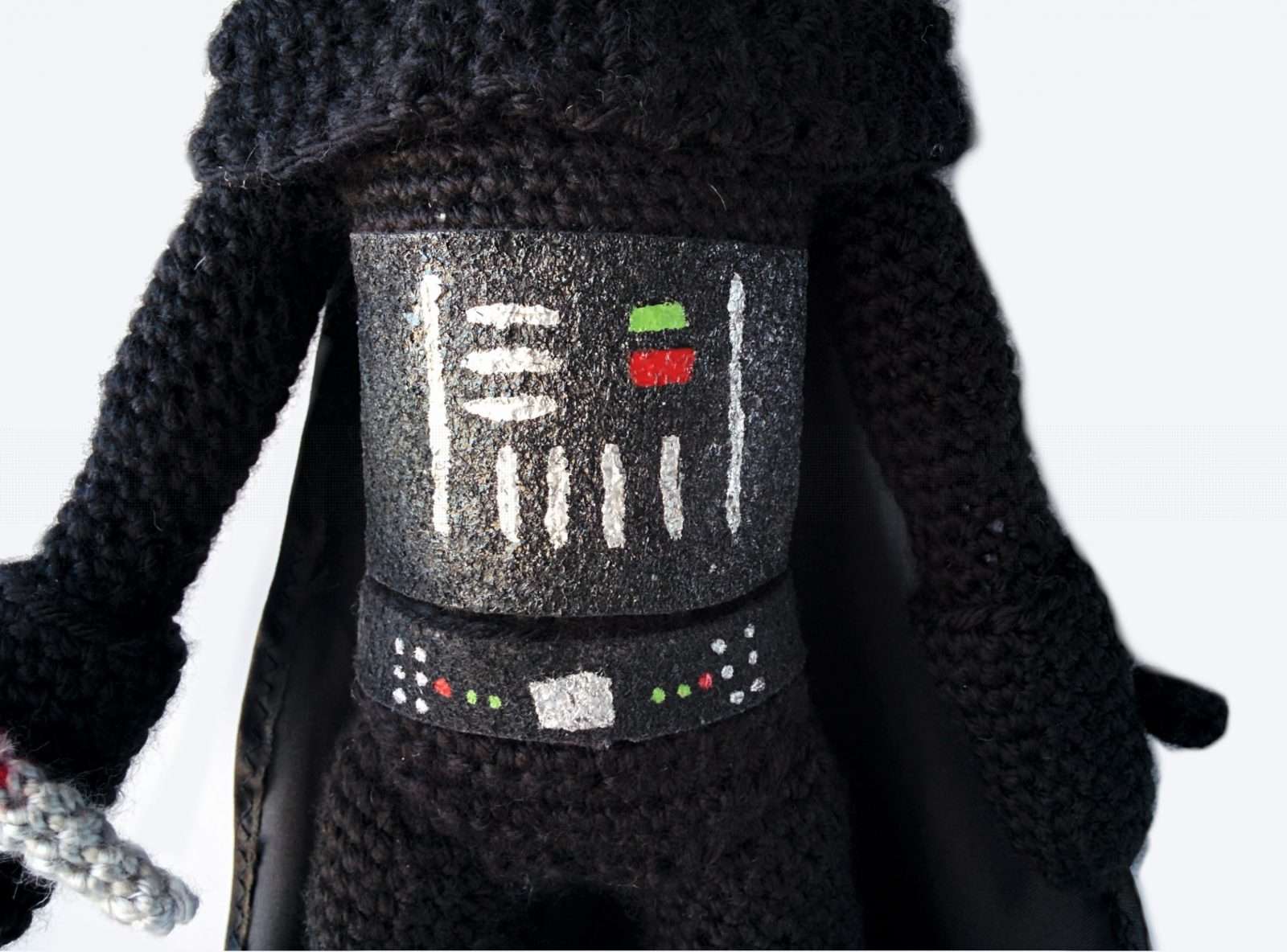 For the chest plate, I cut out a rectangle that fit between the belt and the bottom part of the shoulders/armor and wide enough to cover just the front half of the torso. Then I used a flat paintbrush to paint on two rectangles in red and green for the lights on the right side. I painted three horizontal silver lines next to those and 4 vertical lines under all of that. Then, I added two silver vertical lines on either side.

I used the same black painted felt to cut out the shape of the mouth. For the mask, I cut a triangle of the black felt and painted three silver dots at each point. Then I added some silver lines to finish it. 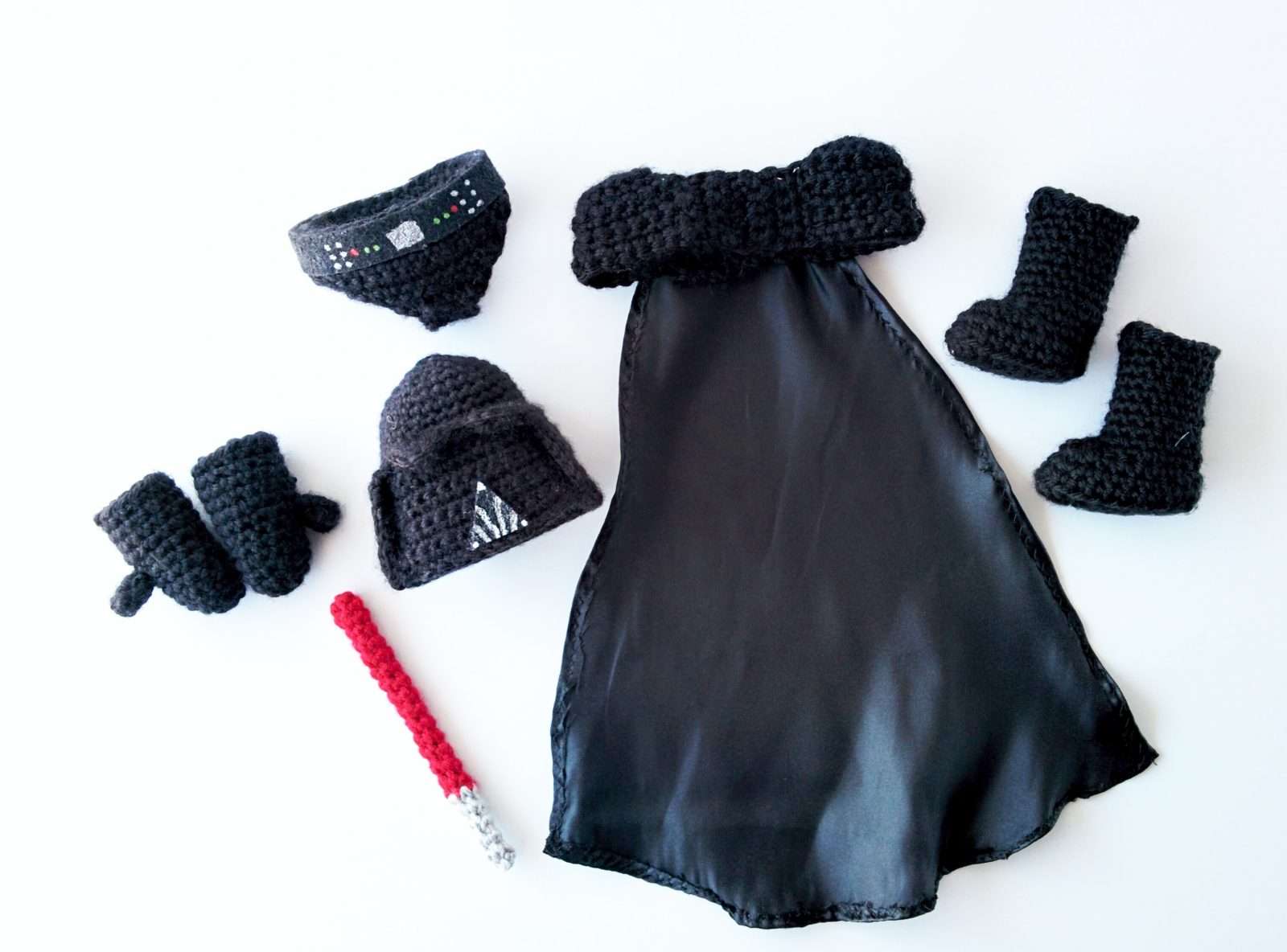 I used Mod Podge to glue everything into place. Basically, I just brushed it on the back of each piece of felt, positioned it where I wanted it and stuck it on. I used pins to hold the felt in place while the glue dried and once it had, I removed the pins. I decided not to sew the clothing and lightsaber into place like I usually do. My sister liked them to stay separate. 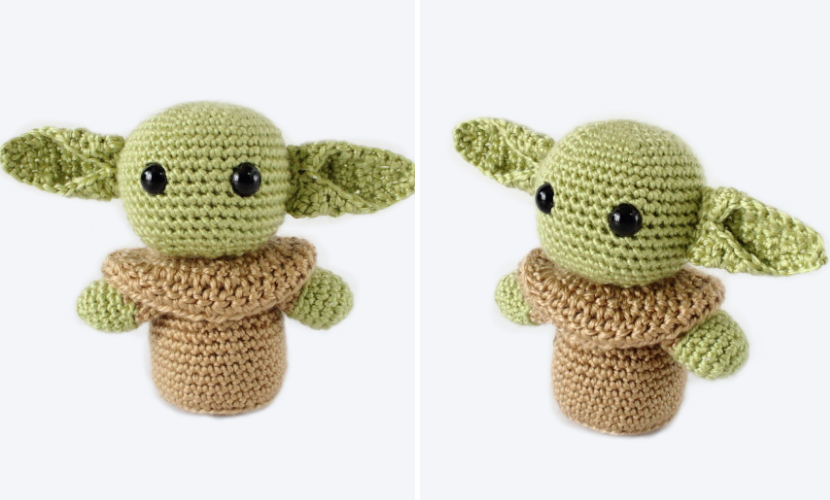 I’m completely obsessed with this crocheted Darth Vader, and I think it looks SO much better than I expected it to. Give this pattern a try and let me know how it goes! I would love to see what you guys make, so be sure to find me on Instagram (@_theblueelephants) and share your pictures. And if you want to stay in the loop, subscribe to the newsletter below and you’ll get blog updates and subscriber-only bonuses in the resource library!

How to Make a Crocheted Leprechaun (Pattern)

10 Habits That Will Make You Crochet Better...

What was the finished height?

He is 15 inches tall

Your sister must be soooo impressed Shehla, your Darth Vader is really cool and I love the way you made all the accessories so true to life. Great job

Thanks, Michelle! She loved it and I think it was definitely worth the extra time I took to get the details right.

Love it ❤❤ thanks baji